Should You Get a Central Air Unit or a Wall-Mounted AC? 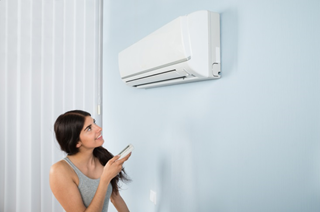 This is a question that many people face at some point in their lives, particularly in a hot desert environment like ours. The truth is that neither style of unit is going to be supremely better than the other. Ultimately which one you should pick depends on your situation. The situations that best suit a wall mounted unit, since it’s a one or the other choice, are the ones that don’t call for a central unit. Financial situation plays an important factor in the decision as well but is more complex than just the sticker or installation price of the individual units.

Determining the long-term cost of any air conditioning unit has many variables. Everything from humidity, desired temperature, energy usage of the unit, cooling habits and patterns to insulation of HVAC ducts and general energy efficiency of the home comes into play. Because of this there are a lot of generalizations. Call Cooper Climate Control for a free AC installation estimate and we’ll help you figure out which unit would work best for you.

Energy efficiency plays a big part in long term financial burden as do maintenance and upkeep costs. As a general rule of thumb, central units are going to be more energy efficient than wall mounted units but will have to cool a larger area and require more upkeep and maintenance costs. A large part of the cost differential between the two in the long run is that people often forget to adjust their central units when they leave home for work or vacation. Finally, central units increase the resale value of a home more than wall or window mounted units do.

Central units are going to be more effective at cooling a single cubic foot than a wall mounted unit and are responsible for cooling a greater volume. To explain it a little further, part of the benefit of central is that it dehumidifies the air better than wall mounted units can. This is because the cooling process condenses water vapor out of the air at a steady rate.

Because the central unit is going to be working with a greater volume of air, it is going to more quickly, and cost-effectively dehumidify the air in the home. A single wall mounted unit will have a very hard time competing because at best, it’s doing a good job of dehumidifying a single room, only to have all its work blown away whenever the door is opened.

When to Get a Wall Mounted Unit 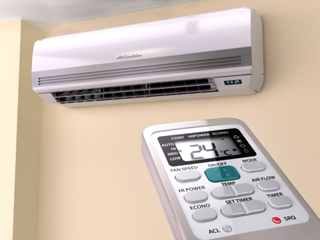 Probably the best situation for a wall mounted unit is for the home of a single professional or childless couple. The second best situation would be a new addition that would be more expensive to extend central air to. When adding another room onto the far end of the house, it can be more cost effective in the long run to simply include a wall mounted unit in the design, rather than try to pipe cool air that much farther. Both of these revolve around the principle that only a small area of the home needs to be cooled at a time, wherever the resident is at the time.

Also, these situations are based on the financial savings of cooling only a small section of the home at a time. Finally, there are some that say that it’s better to get a new wall or window mounted unit than to repair leaking or poorly insulated HVAC ducts. This is untrue. Ultimately, it’s a very shortsighted argument and assumes that the homeowner is fine with giving up cooling in a majority of the home, which is not the case with most homeowners. So, it’s going to be less expensive in the long run to fix that duct work than to install and run multiple wall mounted units.

When to Get Central AC

Any time that you want to cool most of the home and not just particular rooms, you should get central AC. Even if you want more specific room cooling control, there are newer central AC units and thermostats which can accommodate that. If you’re a family with kids, it’s going to be more cost-effective to cool your bedroom, the kid’s bedroom(s), and living spaces with central air than with an array of wall mounted units.

If you own your own home and plan on staying there for any period of time longer than a few years, it’s also going to be in your best interest to get a central unit. They make the home more comfortable and more valuable than wall mounted units do. Generally if you think you need more than three wall mounted units, it’s time for central cooling.

If you have any further questions or would like to consult with a professional in person or over the phone, call us at 480-460-7417 or visit us online.